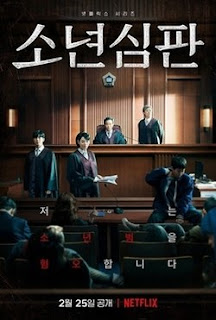 Juvenile Justice (Korean: 소년 심판; RR: Sonyeon Simpan; lit. Juvenile Judgement) is a 2022 South Korean streaming television series. Directed by Hong Jong-chan, it stars Kim Hye-soo, Kim Mu-yeol and Lee Sung-min. The series, which tells the story a judge, who is known for her dislike of juveniles, gets appointed as judge of a juvenile court was released on Netflix on February 25, 2022.

Juvenile Justice follows the story of Shim Eun-seok, an elite judge with a cold and distant personality, who is known for her dislike of juveniles, as she becomes a newly appointed judge of a juvenile court in the Yeonhwa District. There, she breaks customs and administers her own ways of punishing the offenders. She has to deal with and balance her aversion to minor offenders with firm beliefs on justice and punishment as she tackles complex cases while discovering what being an adult truly means.

The court-room drama sends a message of how society is also responsible for juveniles’ acts.

Next Hereditary 2018 English With Subtitles (webseries.club)