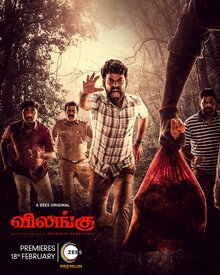 Vilangu (transl. Handcuff/Animal) is an Indian Tamil-language crime thriller web series produced as an Original for Zee5, directed by Prasanth Pandiyaraj of Bruce Lee fame. Produced by Escape Artists the series stars Vemal in the lead role along with Ineya, Bala Saravanan, Munishkanth and R. N. R. Manohar. The series comprised seven episodes and was released on Zee5 on 18 February 2022.

Paridhi (Vemal), a sub-inspector at the Vembur Police Station, in the outskirts of Trichy, is unable to balance his personal and professional life and it is the latter that consumes most of his time. A jewellery theft in a house, a decomposed dead body without a head, a cold-blooded murder – all three crimes that happen back to back, fall under the Vembur Police jurisdiction and the crimes are being investigated by Paridhi and his team of Police officers including Karuppu (Balasaravanan), Uthaman (Munishkanth), and others. As they set out to find the killer, they are welcomed by a series of unexpected events. Who is responsible for the murders that happened in the village and what was the final outcome of the police investigation?